Art Déco
Art Déco was a popular international design movement between 1920 and 1939, affecting the decorative arts such as architecture, interior design and industrial design.
The movement received its name after the exhibition "Exposition Internationale des Arts Décoratifs et Industriels Modernes".
It is a collective noun related to several movements in several countries, which were mainly a response to Art Nouveau and Jugendstil.
The design is firm and simple; long, thin forms, bent surfaces, geometrical forms, red, black and silver, abstraction and clear colours.

Art Nouveau
Art Nouveau is an art movement, which emerged between 1880 and 1914 in several places in Europe, mainly as a response to the impressionism.
The Art Nouveau movement is known in several countries under different names: Jugendstil in Germany, Tiffany in the United States, Sezessionstil in Austria, Nieuwe Kunst in The Netherlands, Style Liberty in Italy, Style Sapin in Switzerland and Modern Style in the U.K.
A common characteristic of the Art Nouveau movements is the use of undulating ornamental lines, usually in the form of stylised plants.
In 1896 Siegfried Bing opened his Parisian gallery in the Rue de Provence, named L'Art Nouveau. He became a stimulator of this renewing art. The movement was named after his gallery.

Barbotine
Barbotine is a technique of pottery decoration involving the application of a slip to the pot, not in an even layer but in the form of thick incrustations in patches or trails. 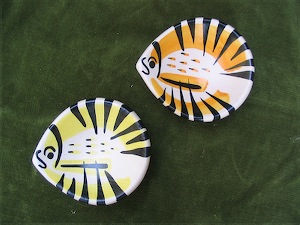 Cubism
Cubism is a painting movement within the modern art at the beginning of the 20th century.
Characteristics of cubism are: blunted volumes, confusing perspective, collage, different points of view, still life, analytically, synthetic.

Email cloisonné
Email cloisonné is a enamel technique. A plate is used on which (precious) metal wires are welded to form cells (in every desired form). These cells are then filled up with enamel.

Earthenware
Collective noun for crockery made of baked soil, loam or clay.

Faience
After the French word faïence. Originates from the Italian village Faenza. Glazed and painted earthenware. Synonym for faience is majolica.

Grand feu
High temperature which is necessary to bake earthenware and porcelain.

Kaolin
Soft white clay that is an essential ingredient in the manufacture of china and porcelain.

Majolique setting
A setting on the unprocessed glaze layer.

Petit feu
A decoration technique where a decoration is applied to a ceramic object that already has been baked and which is subsequently baked at a low temperature.

Porcelain
Porcelain is a particular form of ceramics. Porcelain is hard, translucent and has a clear sound.
To produce porcelain one adds to a clay as white as possible, usually called kaolin, silver sand (quartz) to make the clay less greasy and to make sure it is more glassy after baking. Feldspar (granite) is added to reduce the baking temperature.
European porcelain is baked twice: the first time at 900 ºC (which produces so-called biscuit); after applying a glaze layer the objects are baked at a temperature of approximately 1400 ºC.

Terre de pipe
Soft white earthenware, often used for making pipes, that is a kind of unglazed faience fine with a superficial resemblance to biscuit, or unglazed, porcelain.